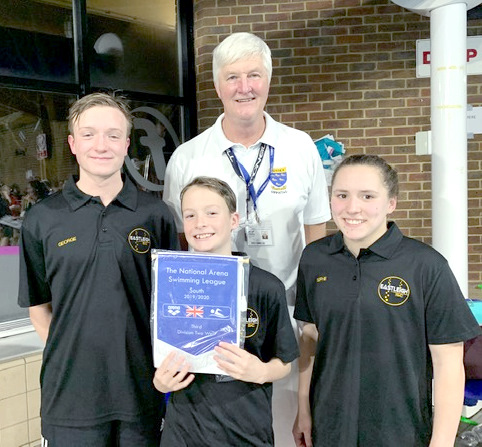 In a thrilling, ear-bursting finale to the Arena League season, Eastleigh SC won promotion to Division 1 West of the Arena League - a fantastic achievement by our swimmers and one of the club's big goals for 2019.

We went into the final round knowing that a third-place finish or better would be enough to win promotion back to Division 1 after an absence of several years. A confident and excited squad of our Performance swimmers headed to Bognor Regis with promotion in their sights.

On this occasion, our competition came from teams from Littlehampton, Guildford, Haslemere, Staines and, our biggest rivals for promotion, Farnham. Against some exceptional swimmers from the rival clubs, our swimmers of all ages and across all our Performance Squads performed admirably to secure the points needed for third-place and to win promotion. Littlehampton and Farnham chased our points tally and were neck and neck after the first few events, but gradually our swimmers' greater fitness and determination showed as we pulled away to secure that all-important third place result.

We had some magnificent individual swims and even better relays, with club records being smash by boys and girls teams in both the freestyle and medley relay events. The whole team was on poolside to roar their teammates to the finish. The points scored in those relays were critical to our promotion.

Newly appointed Senior Girls Captain, Sophie, said with delight: "Well done to everyone who took part in the Arena League. Most of us lost our voices by the end but the cheering clearly paid off! I hope everyone is looking forward to promotion and seeing those yellow and black pompoms back next season!" and new Senior Boys Captain, George, added: "Well done everyone! Great swimming and team spirit, brilliant result being promoted and congratulations to all that swam in all rounds of the Arena League over the past few months."

Proud Head Coach, Paul Dollery, recognised the scale of the achievement for the club: "This great result has taken the club many years to achieve so it goes without saying how well the swimmers performed as individuals but more importantly as a team and a whole club. I was so pleased to see the team supporting and encouraging each other from the lane ends and sides working as a team together to achieve this result."

The club records set by the relay teams at the event were: